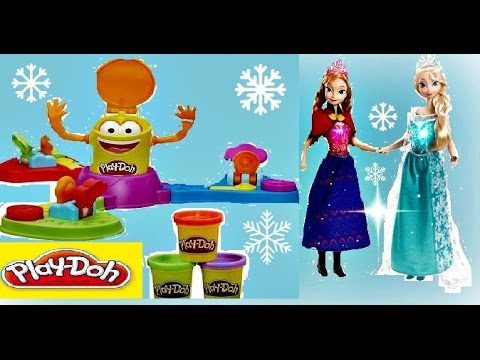 Hi Disney Toys fanclub Presents Launch Game From Play Doh.
There’s a world of squeezerific fun in Play-Doh Games! This hilarious Launch-O-Rama game is giggles galore for little gamers. They get to make their own Play-Doh ammunition and launch it at the center of the game, where the Orange Guy waves his wacky arms and spins and his lid opens and closes. Whoever gets the most Play-Doh modeling compound into the can wins! Your little ones are guaranteed silly drama with the Launch-O-Rama game
Elsa and Anna Join to score and have fun with Launch Game.

Queen Elsa of Arendelle, is a fictional character who appears in Walt Disney Animation Studios’ 53rd animated film Frozen (2013). She is voiced primarily by Broadway actress and singer Idina Menzel. At the beginning of the film, she is voiced by Eva Bella as a young child and by Spencer Lacey Ganus as a teenager.

Princess Anna of Arendelle is a fictional character who appears in Walt Disney Animation Studios’ 53rd animated feature Frozen (2013). She is voiced by Kristen Bell as an adult. At the beginning of the film, Livvy Stubenrauch and Katie Lopez provided her speaking and singing voice as a young child, respectively. Agatha Lee Monn portrayed her as a nine-year-old (singing).